You can use lenses to annotate by magnifying and calling out specific areas of objects. 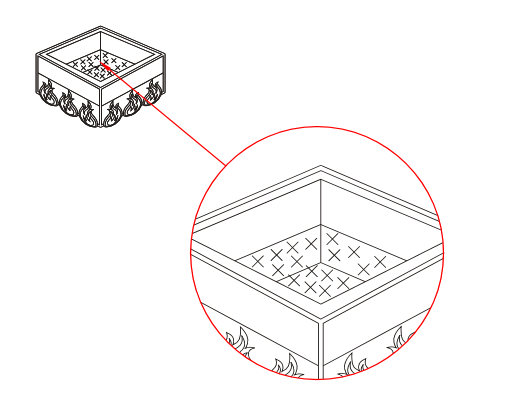 To Create a Lens Using the Annotation Lens Tool:

Creating a Lens from an Object

If you would like a more elaborate shape, you can create a lens from any object (except a lens). If you want to preserve an object, make a copy and convert the copy to a lens. Fill inks are removed when vector or text objects are converted to lenses. The stroke on a lens is not affected by the effects applied to the lens.

You can also apply effects to a lens the same as you apply effects to other objects. See Using SpriteEffects. Lens objects let you limit an effect to a particular region of an illustration, or they let you magnify an area when you want to show a detailed view. The default lens effect is normal (100%) magnification, but you can change this if you want to see a magnified view. See Setting Lens Magnification. You can also change the viewpoint of what is displayed in the lens. By default the viewpoint is the center of the lens. If you want to offset the lens from whatever is directly behind it, you can change the viewpoint. See Setting a Lens Viewpoint.

To Create a Lens Object:

Fill inks are removed when vector or text objects are converted to lenses.

To Copy a Lens Object:

Magnification affects the view through the lens to the lens viewpoint. If the default viewpoint (at the center of the lens) is used, the lens displays a magnified view of objects behind the lens. If the viewpoint has been moved, the lens shows a magnified view of objects behind the viewpoint. These options are available in the Properties bar, SpriteEffects palette or after you create a lens with the Object | Convert to Lens command.

When you change the magnification value, the lens view changes, unless the Frozen option is selected in the SpriteEffects palette. (See Freezing a Lens.)

You can set a viewpoint visually by clicking in the document, or precisely, by entering values for the Absolute or Relative position.

To Set a Viewpoint Visually:

To Set a Viewpoint Precisely:

To Reset a Viewpoint:

An absolute viewpoint is set at a specific location in a document and does not move. The lens shows the same absolute point no matter where the lens is placed on the page.

A relative viewpoint is set at a specific distance from the center of the lens. If you move the lens, the viewpoint moves the same distance and direction. When Frozen is selected, the view in the lens does not change; if you deselect the Frozen option, the view then changes to the current viewpoint.

To Set the Relationship of the Viewpoint to a Lens Object:

In the SpriteEffects palette, select Absolute or Relative.

To Create an Object at the Lens Viewpoint:

It is possible to create a vector object at the lens viewpoint.

The shape of the vector object will be the same as the lens object.

The view through a lens depends on the stacking order of the lens, as well as the position of the viewpoint.

Use the stacking order to change a lens view. Send a lens to the back of the stack so nothing appears in it. Bring it to the front so all the objects at the viewpoint appear in the lens.

You can use a lens to display layered views; e.g., you can draw a map and create a lens to show a close-up of an area. If you add text after you create the lens, the text is higher in the stacking order. The text will not appear in the lens close-up of the map.

Selecting Frozen overrides a lens relative viewpoint; the lens will show the same view after being moved. If you deselect Frozen, the lens will display the new viewpoint location.

Freezing a lens can avoid slow performance when you edit objects shown in a lens. When you finish editing, select the lens and deselect the Frozen checkbox to update the viewpoint.

To Freeze a Lens: